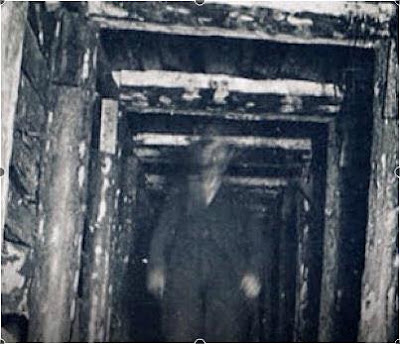 Knockers or Tommyknockers
Tommyknockers or Knockers were so named because of the knocking sounds they make in mine shafts as they work. They are considered to be spirits of mine workers.
Cornwall, Knockers
In Cornwall, just called knockers, they were considered to be the ghosts of Jews who worked in the mines. Some stories state that these Jews were sent by the Romans to work in the mines as a form of punishment—for the death of Christ. It is said because of this knockers cannot tolerate the sign of the cross, so miners avoided making anything with a cross or an X.
According to the legend, knockers were very industrious—they were seen working through the night. They are most often associated with rich lodes of ore; thus, miners would pay close attention to where they heard these supernatural knockings.
Miners reported hearing laughter and footsteps and sometimes they reported seeing them. They were most often described as very small in stature and wearing tiny versions of standard miner’s garb. Miners recounted seeing them working alongside the living.
They were known to help miners in trouble. It is stated that whistling offended knockers so miners believed it to be unlucky to whistle in mines. It was also believed that miners should leave food offerings for knockers so they would not cause trouble. Miners were known to carry extra food in their lunch pails.
American Tommyknockers
In American mines, tommyknockers behaved similarly to their Cornish counterparts. Though a few were attributed with traits more similar to the vicious German Kobolds.
In the late 19th Century, the Mamie R. Mine, in Cripple Creek, Colorado, was supposedly haunted by malicious tommyknockers that lured miners and then proceeded to jump up and down on beams until they collapsed upon the men.
These tommyknockers were also blamed for snapping cables and for premature blasts; they were heard snickering at the miners as they did their evil deeds. In another post I write more about this Cripple Creek story.
Cornish miners during the California Gold Rush of 1848 were much sought after. They were often referred to as “Cousin Jacks.” This is because mine owners would ask their workers if they knew of other miners that were willing to work. These miners would reply, “”Well me cousin Jack over in Cornwall will come, if ye can pay the boat ride…”
The Cousin Jacks were notorious for losing tools as they were diving out of shafts just before they collapsed. They always credited their knocker friends for saving them and refused to go back to work until assured by the management that the knockers were already back working.
Belief in knockers lasted well into the 20th century. When one large mine was closed in 1956, the owners sealed the entrance, several generations of Cousin Jacks circulated a petition calling on the mine owners to free the knockers so they could move on to other mines. The owners complied.
Throughout the southwest, including other mines in Colorado, friendlier tommyknockers were described as protective and helpful. Miners in general viewed these supernatural companions with fondness, and told many stories about them—miners were known to make room for them at the bar at the end of their shifts.
Tommyknocker stories were frequently written about in local newspapers. While doing research on western mines and miners; I often find references to tommyknockers.


Today these spirits are believed to haunt abandoned mines all over. Source Ghosts, the paranormal, supernatural, myths and legends
Posted by Old John's Weird World at Thursday, August 29, 2019