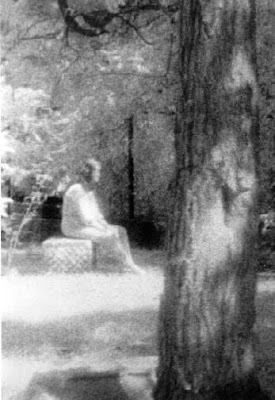 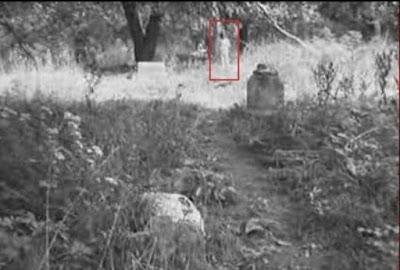 This small, abandoned cemetery is known for being one of the most haunted locations in the country. The land was first settled in 1835, and the graveyard was set aside in 1864. It is home to multiple recorded paranormal events, including a phantom house, spirit orbs, disappearing cars, and full bodied apparitions. During the prohibition era, the bodies of those killed by gangsters were found in the adjacent lagoon, along with some illegal firearms.
The most famous apparition is known as the Madonna of Bachelor's Grove. She is a lady dressed in white, and she often appears holding an infant on moonlit nights. In 1991, members of the Ghost Research Society conducted an investigation of the site. During the investigation, they managed to capture an image where a woman appeared to be sitting on a checkered tombstone. The full bodied apparition was not present during the investigation, and only appeared later when they developed the film.
Posted by Old John's Weird World at Sunday, September 15, 2019